Writing Rules You Should Feel Free to Break 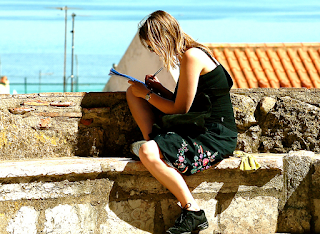 Many young writers look to their idols for advice on how to write well. And they will find plenty of it. Modern writers seem to have developed a lexicon of rules that labels some types of writing or even whole categories of grammar as “bad” and others as “good”.

The fact, for example, that the Hemingway app exists, where writers can put their writing through the lens of a virtual Hemingway and have their work analyzed according to his values as a writer, proves the point. The app checks your work for its simplicity, highlighting complex sentences, complex words, adverbs and passive voice so that you can eliminate those “errors”.

But where did we get this idea in the first place? That English writing has to be adverb-free and as to the point as possible?

For the rebel writer, here’s a list of these and other writing rules for you to break:

Yes, simplicity can be elegant. But does that mean that all writing should be so straightforward? What about writers like Gabriel Garcia Marquez with his long, twisting story lines and constant side-tracking? Or Faulkner’s stream of consciousness sentences that sometimes took up an entire page? Or J.D. Salinger who also loved a long-winded phrase? Or this famous first sentence from Charles Dicken’s A Tale of Two Cities:

Many a writer has famously derided the use of adverbs. But it’s a curious practice to eliminate an entire grammatical area of your own language. Perhaps it’s time to embrace the adverb and its ability to describe essential information. Here are some words I bet you didn’t know were adverbs:
But those aren’t the adverbs some writers want to eliminate. These are:
All words can be used to gain the effect the author desires. Ask John Banville who won the Booker Prize for The Sea and who, by the way, used adverbs liberally throughout the book.

Elmore Leonard famously declared (he would say “famously said”) that all dialogue should only be expressed with the word “said”. For example, you shouldn’t use “grumbled”, “whined”, “cursed”, “cried”, “swore”, “slurred”, “whispered”, “shouted” or any other word that could be replaced with “said”. The benefit of these other forms of “said” is that they can explain volumes about a character’s emotional state and complement the sentence they’re speaking. A simple example:
“Give me your gold or I’ll take it myself,” the giant growled.
Would it be as scary if he merely said it?

Depending on the context, repetition of words or phrases can help to drive a point home or even be poignant. The phrase “And so it goes” appears throughout Kurt Vonnegut’s Slaughterhouse Five as a sort of punctuation for some of his most emotionally evocative scenes. This sentence from Audrey Niffenegger’s The Time Traveler’s Wife is a good example of how repetition can be used: “Clare takes my hand, and we stand together, in the crowd, and if there is a God, then God, let me just stand here quietly and inconspicuously, here and now, here and now.”

Sometimes rules are made to be broken and that’s especially true when it comes to writing. Explore the language with all of its adverbs, run-on sentences, repetitions and non-saids. See what happens.

I am a former educator, now working as a freelance writer and content marketer. I am also a lover of music, books and all things tasty.

In this blog I share my learnings on all kinds of writing - from creative to academic to online content creation.